This post was written by Lance M. Burris – from Indianapolis.

Located in the central part of the United States is one of the shining stars of hospitality in “where to stay, what to eat and what to see.” It is the big, little city that makes you feel at home.  It’s Hoosier friendly people creating an atmosphere of comfort and entertainment to those on vacations, work assignments or just traveling through the nation’s twelfth largest state.

Indianapolis is second to Washington D.C. in the amount of monuments and memorials. Visitors can take a walking tour of all of the monuments or go up in Monument Circle’s Soldier and Sailors Monument for one of the best views of the city. 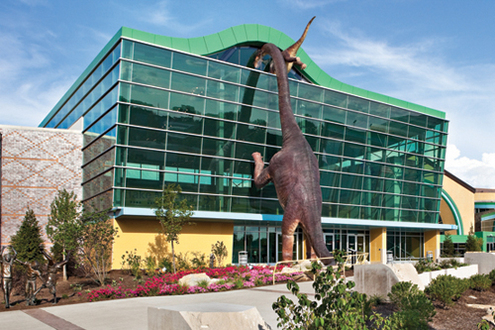 Many wonderful, creative restaurants exist in the city – if you want a steak, it’s Moe’s Steak House or St Elmo’s whose shrimp cocktail is called “the world’s spiciest dish” by the Travel Channel.  There are so many, it is hard to list them all, but you might want to consider Rick’s Boatyard (pictured below), Pullman’s Restaurant (in historic Union Station), Canal Café (in the Indiana State Museum), Old Spaghetti Factory or the Rathskeller Restaurant.  The kids always love Johnny Rockets in the Circle Centre Mall Downtown whose hamburgers and hot dogs are always a hit along with the five cent juke box in a 50’s atmosphere. High Velocity Restaurant, located in the J.W Marriott Hotel, has excellent menus for a modest price.  It is a challenge to finish the Nachos plate in one sitting, a doggy bag will be in order. Most of the eateries in the city are kid-friendly with menus that will satisfy their hunger. In most upscale restaurants the meals range from $12-$24.00 in price for adult menus except for the steak houses which will run a little higher.

Downtown hotels make a favorable place to stay as most are connected to places of interest, like the Circle Centre Mall, Convention Center and the Lucas Oil Stadium (Colts). Some offer free breakfast like Embassy Suites and Hilton Indianapolis Hotel Suites (pictured below). There is plenty of night-life for parents, newlyweds and singles.  Take the Slippery Noodle Inn for example.  It is the oldest bar in the State of Indiana, established in 1850 and the oldest standing commercial building left in Indianapolis.  It is on the National Register of Historic Places.  Some serious blues gigs are held there seven nights a week with the likes of Buddy Miles, Sugar Blues, Matt ‘Guitar’ Murphy, Yank Rachell and others.  The Brady gang and Dillinger were known to hang out there and did target practice in the back.

How about taking a romantic Gondola ride on the three-mile water canal in downtown Indianapolis complete with a singing gondolier.  What a way to cap-off  a wonderful, fun-filled day in Indianapolis.  The cost of the 30-minute water adventure is only $30.00 per person.  Or you may want to take a self-guided canal promenade on your own.  There are many sites to explore along the way.  You can stop off at the Indianapolis Zoo and White River Gardens, the Indiana State Museum, Indiana Museum of Contemporary Art, Victory Field (AAA Baseball), Congressional Medal of Honor Memorial, USS Indianapolis Memorial, NCAA Hall of Champions and the Eiteljorg Museum of American Indians and Western Art.

It would be an injustice not to mention the Indiana Motor Speedway where every year a spectacular race day occurs.  From the Mini-Marathon to the 500 Festival Parade (Saturday, May 26, 2012) which features 33 race drivers and their cars, to the day of the race (May 27, 2012), the city is alive with activities. The kids will like the floating images of comic favorites such as Yogi Bear/Boo Boo, SpongeBob Square Pants, Fred and Wilma Flintstone and others.

2 thoughts on “Indianapolis – The Midwest Star”